How Important is it?

I have been doing a lot of thinking when it come to the saying "How important is it?"

The usual answer for me would be, " Pretty Darn Important!"  "Everything is Important!". But, is it?

I usually go straight to my reactionary freaking my freak mode!  You know, get all excited about something that is totally out of my control.

Last weekend, at the cabin, Tom was doing his regular thang just putzing around the garden.  He has lost quite a bit of weight this year and his ring is very loose.  While putzing, it was wobbling and he pushed it up to his knuckles and went about his putzing.  It was 5 minutes later that he realized his ring was gone.   This ring belonged to his father who passed away several years ago.  This ring means the world to him.

Tom and rings.  His first wedding ring was gold and engraved with "I love you".  It was lost in a laundry mat when he decided that doing laundry while I was in the hospital recovering from the birth of our first child would be a nice gesture.  Not only did he lose his ring, he lost one of mine! We posted REWARD signs and never got them back. There was some lucky college student living in Pammel Court in Ames, Iowa who probably hit the mother load when he or she found them.

His next wedding ring was purchased at a jewelry store that was going out of business. It was 80% off. This ring cost me $27.  By the time I purchased this ring, we were entering the "not so much lovey dovey" part of our marriage.  No engraving, just wear it already!

During the time that he wore this cheap ring, he was a large animal veterinarian in Minnesota.  His specialty was dairy cattle.  Since I am not a veterinarian and couldn't even play one on TV, I can't tell you the REAL medical terms of what he did for pregnant cows. Here is my version. He stuck his  bare arm up the butt of a female cow to check stuff. ( I really do know the medical terminology but like my version better) He lost his ring inside her butt.  At least he didn't call me to come find it, and we don't talk about this loss. It was never returned but I bet somewhere in that field is a shiney object waiting to be found.

His third wedding ring was purchased from a secondhand store. A $28 purchase. I was never going to spend anymore than that! No love notes. It was not wrapped as a present.  Just put it on and don't lose it, mister!   He wore that ring for over 20 years and never lost it. On our 30th anniversary, we go new rings. Our old rings were cashed in and I got myself a John Hardy silver chain and pendent!  I have lost and found that a few time too!

He has had 4 wedding rings.  When his dad gave him his ring, I told him to wear that instead of his new one that we got on our 30th anniversary. His dad's ring has a 3/4 K diamond.  And it matches my new wedding ring.

When he lost his dad's ring I felt sad but not freaked out like I usually feel.   I had a peace about me because I had been pondering all week the phrase " How important is it?"

I belong to a group that meets weekly and we share experiences.  "How important is it?" was the topic on the very week Tom lost that ring.  My friend had shared an experience of losing her mom's ring and then finding it. In her discovery, she said, "No one was hurt, no one died, it was just a ring." It was so ironic that I would be experiencing the same lose 2 days later.

We purchased a metal detector this weekend and put it to use as soon as it was assembled.  We retraced Tom's moves through the garden and found a lot of IRON.  When we got to the summer squash, the beeping changed and there underneath the leaves laid his ring. 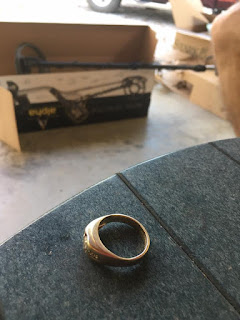 How important is it?
If you don't get wild and crazy, blaming and accusing, ranting and raving, bitching and moaning about something that is totally out of your control, you can feel so much peace when things work out. And all things work out, just not always like you want them too!