Of Bird and Hope 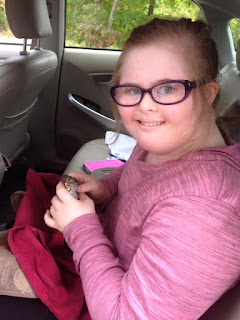 When you live in the forest on the weekends you just sort of get accustomed to dead animals, dead bugs and dead snakes on the property.

The first dead animal we encountered was the year our cabin was built.  The birds weren't used to a building in the way of their flight path. We would find beautiful dead cardinals, nutshatch and finches on our porch upon arrival.

The first dead bird turned out to be Hope's first pet.  Have you ever read Of Mice and Men by John Steinbeck?  That book is one of the creepiest books out there.  I should write a book Of Bird and Hope, it could be equally as disturbing.

That Saturday, we were inspecting the building process of the cabin.  We were thrilled that our porch was complete and the cabin had windows and a door.  We didn't pay much attention to the fact that Hope had claimed a dead bird.

Hope has always had a fear of animals.  She had no fear of this dead bird.  She picked it up, carried it to the car, dumped out an old Tupperware container, lined it with a pink washcloth, and put the bird inside.  She talked to it, giggled about it, caressed it, and kissed it.  I strongly suggested that it wasn't a good idea to kiss it but Hope's answer was, " MOM!!!!"  I tried  to convince her to leave it on the ground because....well....duh....Germs! I lost!

When it was time to leave, she had the bird resting comfortably next to her in it's makeshift coffin.  I was in disbelief that she was still hanging onto the concept of it being a pet! Did she name it?  I don't thinks so.  So, let's just call it DEAD BIRD.

Our weekend commute to the cabin takes 72 minutes, by the time we got home, I totally forgot about her fascination about DEAD BIRD.

It dawned on me halfway through the night when I woke up with a jolt....DEAD BIRD...where is the dead bird?

Just like the Night Before Christmas, I bolted down the stairs, unlatched the garage door, threw open the hatch of the car....to see an empty Tupperware coffin.

OH MY What's the matter?

This was not Hope's first rodeo with a small animal.  One time, when Tom was cleaning the fish tank, Hope somehow hauled the "large black fish" up to her room. When Tom realized the fish was gone and nowhere on the floor near the tank, he knew that Hope had to have taken it or the cat ate it.  He asked her and she denied it but with much diligence, he finally found it alive in one of her drawers!   Could this be the case this time?  Did she carry DEAD BIRD to her room? Why didn't she carry it in it's "casket"? I turned on her lights and dug through her drawers! No DEAD BIRD.

We have always had a "thing" about saving dead animals.  We had parakeets.  Remember the show XFiles with Mulder and Scully back in the 90's? That was one disturbing show! More than once, I would jump out of my skin and scream for the actors to MOVE!  One Friday night, I scared the parakeet with my excitement and it fell off its perch and died!  Being the Veterinary Pathologist that he was, Tom put it in a plastic bag, stuck it in the freezer so he could do an autopsy later.  That poor bird became the talk of the High School and was visited often by my daughters classmates until Tom finally figured out the death.  It died of some big scientific explanation. Bottom line, I was not the responsible party to it's passing!

Back to DEAD BIRD.  Where was DEAD BIRD?  I figured in the freezer. Nope!  We have 3 freezers and I checked them all.  I woke Tom up from a dead sleep to see if he had anything to do with DEAD BIRD. Nope!  He was too tired to talk about it and how dare me accuse him of freezing DEAD BIRD!  See above paragraph on why I would accuse him!

DEAD BIRD was not in the freezer, it was midnight, and I was freaking my freak.  I went back to the car. I looked under the seats, in the glove compartment, between the seats and under the car mats.   When I was in the back seat checking under the mats, I noticed that the "pocket" on the back of the front seat was bulging some.  I stuck my hand in the pocket and pulled out DEAD BIRD.

Hope, keeper of all thing, hoarder of most saved DEAD BIRD in the safest place of all.  And I got to touch it.  Of Bird and Hope, coming soon to a bookstore near you.
Posted by cinda sue originals at 5:19 PM