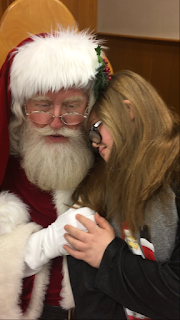 Hope loves Santa Claus, Christmas, presents, bags, wrapping paper, candy canes, lights and snow globes. She celebrates Christmas 365 days a year. There isn't a Hallmark Christmas show that she hasn't seen.  She has the plot down...There is a non believer, there is a divorcee or single person, there is a lot of  fake snow, a Santa disguised as a "real" person and a snow globe.

The first year she asked for a snow globe, I thought, " How cute is that?" After that year, she has added, a baby doll and a candy cane to her list from Santa.  Every year, she wants the same thing.  She makes Christmas shopping easy. Once she has opened her gifts, she always says, " Is that it?"  Typical teenager!!!! Then she gathers them all together, takes them to her room and is gone for the rest of the night!

Santa always brought a beautiful glass musical snow globe. Santa got wise after the third year of Hope breaking them.  I would go to her room and find shards of broken glass, glitter and water soaking her books and magazines.  The glass is extremely thin, amazingly, she never cut herself.  Now I buy plastic snow globes.  It's fun looking for them!  This year it was a huge plastic musical rotating scene with air blown foam balls.

When Hope was 2, we gave her rolls of Christmas paper to unroll and krinkle up.  She got the same thing on her birthday. Now, she will buy it at the dollar store, along with gift bags just to keep the season of giving going.

Hope has her own way of organizing holidays and they are all based around Christmas and Santa.  Her birthday is in January and that is when all holidays begin.
"First my birthday, then Valentines, then St Patrick's Day, then.( we take 5 minutes to list them all)...........and then Christmas and Santa, YAY!"

At the cabin, we have a new friend who looks like Santa.  He stopped in to say Hi on a weekend that Harper and Hope were hanging out on the porch.  I introduced him to the girls as "Santa".  Their eyes popped out of their heads. I told them,  "Yes, Santa lives right here in our neighborhood and he is gathering wood to make toy trucks and wooden soldiers!  You better be good!"

Our cabin is also located 30 miles from Santa Claus, In.  There are MANY MANY Santa's here and MANY MANY Santa helpers who will dress up like Santa.  Having a Santa in our neighborhood is very believable.   We continued to chat with "Santa" about the work he was doing at the cabin below us when the girls started to fight over some "lame" thing.  I excused myself from "Santa", grabbed both girls by the arm, pointed them toward Santa and said, " You just fought in front of Santa, YOU are on the naughty list now!" The scrambled to apologize to him.....this was in August!

Santa is thought to be magical, mystical, and mythical.  He brings hope and love to everyone. Santa is the best thing to happen to this world..  Hope will always love and believe in him and you should too.
Because.....

When you have Santa, you also have hope.
When you meet Hope, you will also meet Santa.
Hope,Santa and hope are real.
Believe
Love
And never give up hope.
Hope Loves Santa.


Posted by cinda sue originals at 9:26 AM