Hope has a dollar! 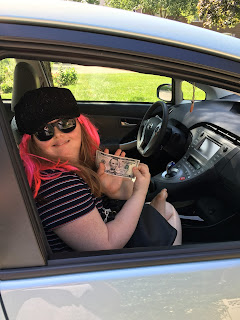 On Tuesdays, it is nothing to find dollar bills tucked away in a wallet  that is in a purse that is  in a gift bag that is tucked under a pile of newspapers, clothes, scarves and hats.  She has an order that she lays her stuff.  And that order constantly changes.

These dollars came from my purse.  Yes, she stole them.  But she thinks that everything is hers and your stuff is hers therefore it isn't stealing.

She loves to hold a dollar bill in her hand and wave it like a flag. This is how she let's people know that she wants to give the dollar to them.

We were in the car, she in her pink wig and hat and me with my new RED sunglasses waiting on the corner of  The Lloyd and Burkhardt Road.  ( This is a major intersection in our town)  There were men holding fireman boots walking up and down between the cars. These were real life Firemen taking time to collect for a CAUSE.  Hope blew kisses, flirted, and squealed when she knew that she was going to give them money.  This was the first time that she handed a stranger money through the car window.

This experience has led her to insist on giving money to anyone who is standing next to the road or next to a red bucket at Christmas time.  Her enthusiasm has made me a better person.

When I am at an intersection where a homeless person is holding a sign, I put on those sunglasses and hide behind the darkness.  I know the controversy.  I know it could or couldn't be a real deal.  I look straight ahead and don't engage.

When I am at that same intersection with Hope in her pink wig and fashion hat blowing kisses at the sign holder, my heart softens as she asks to give them a dollar.  She squeals with excitement as she waves the money. She looks at their face and touches their hand.

I don't know if this person is in need or not.   All I know is....a little girl in a pink wig blew a kiss at someone, gave them a dollar and made them smile. And maybe, just maybe.... they went to the Dollar Tree and bought a coke.