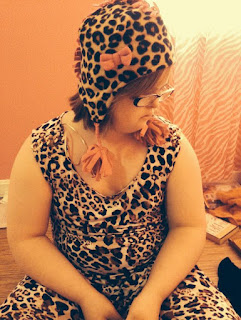 Hope is Eighteen years old and just happens to have Down syndrome. She loves hats, wigs and crowns.  She is very discerning on what hat to wear.  Sometimes she wears two, with a wig and a crown or ears! And most recently, she has been wearing 5 to 6 hats at a time.

She has always loved hats!  When she was five,we had guest over for dinner.  She had been playing alone and emerged into the dining room wearing my underwear as a hat and Tom's underwear as a vest.  She greeted each guest with her usual curtsy and expected hug.  Embarrassing?? If the hat were a leopard laced thong and the vest a neon silky brief, the answer would be NO!  That undergarment style would have made her parents appear sexy under their jeans!   Nope.... her mommy wears granny panties and her daddy wears plaid boxers!  The next 30% off deal at Kohl's warranted a trip to the intimate department for something more stylish....just in case it became a hat!

She seems to have a sense of style that goes with the Holiday, Disney movies,sports teams,political themes or  just plain "Hopestyle". We have purchased hats for full price, half price, Dollar General Price, Goodwill Price,and negotiable garage sale price.  She has stolen hats from sisters, nieces, nephews, dad, grandma, and strangers.

She told a stranger that she likes his hat while sporting a Packer Hat and Crown.
The stranger  responded"I like your hat too!" Knowing full well that BEAR fans detest PACKER fans!   People are very kind to Hope!

I have driven down the busiest streets in our city, with Hope by my side sporting a Clown Wig and Cowboy Hat, a Elsa Wig and army hat, or a Anna Wig and straw hat. The combinations are mind boggling.  She will blow kisses to anyone who acknowledges her!  It makes them smile! 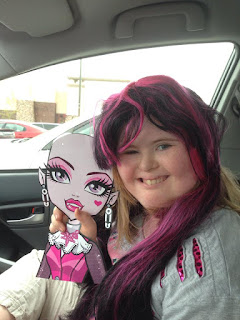 We have had discussions about NOT wearing certain hats to church.  One Sunday I could not get her to remove the "snowman" bowl type hat but she did agree to leave the green wig in the car. Everyone said, " I love your Hat"!  She thanked them, curtsied and blew a kiss!  She is a Rock Star!

I am the most guilty about buying her hats and wigs.  Did you know that you can get wigs for 75% off at CVS after Halloween? Yup, neon green, purple, periwinkle, black with white stripes........  For Christmas, Santa ALWAYS fills her stocking with wigs.  Silly Santa!

One year, while traveling,I found a wig shop in San Fransisco with every iconic star wig possible! And the prices were untouchable!  I had to remind myself about the great sales at CVS back home!

Recently,I was digging around in my garage and found a full tote of hats.  Seriously...a FULL.TOTE.OF.HATS. I brought it down from the rafters and had a flood of memories...the panda ears from DC..The Minion stocking hat she stole from my grandson, the baby size "cheesehead" we bought in Green Bay and the Barack Obama ears and doll that her sister won in a crane drop game!  Every hat, wig,crown and ear had a memory! 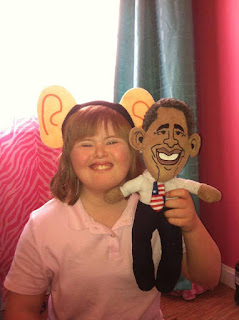 
Posted by cinda sue originals at 9:42 AM