Getting lost and Driving a car!

We spend the weekends at the cabin.  I puts around in the house and Tom handles the great outdoors!  Hope has the reign of the place. We designed it so her room would be like her room at home.  She has a Murphy bed and a closet full of her stuff.

With french doors that open to the living area,her room can become extra entertaining space when her bed is tucked away.
Also, when her bed is up....she has a great space to pile her stuff!

We have Directv and use Cellular data for internet use. Directv so we can watch the Packers and Cellular data because we couldn't get any other kind of internet that would satisfy.

At home she has an IPAD to watch youtube videos and Netflix  She loves the repetition of the ones where the people open plastic eggs and talk about Shopkins and other collectibles.  She is not allowed on weekends to use our DATA. At the cabin, Hope watches videos on a DVR or the Disney Channel.  And it amazes me how well she adapts to not having her IPAD.
.

One weekend was particularly trying with her.  She went missing on a Saturday!  We are talking, nowhere to be seen.  I walked the forest outline and Tom got in the car and drove down the road.  I reached for my phone to call him and it was missing too.  I found my tablet and contacted my  daughter, Melida, via FB to tell her that I couldn't find Hope and asked her to call her dad! She told me that she had been facetiming with Hope!  Not only did she facetime, but she told me that Hope had something weird on her face.  I went back in the house and noticed that her boots were next to the door as well as her jacket. ( One thing that I have learned about being in the forest....always wear shoes!)

She had to be in the house.

She was in her bedroom, in the closet, with a blanket on her head  with my phone....using up the DATA to watch a girl applying eye makeup so you can look like a Barbie Doll!  Hope was wearing makeup....She used  pink marker for her eyes and green for lipstick. She used marker for her fingernail polish too! 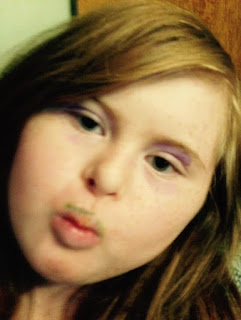 I was relieved, sad,worried, and  upset.  How do you lose someone who isn't missing????  And how do you look at the face and not laugh?

On Sunday, we have a ritual of cleanup before we depart.  Hope is all about going home.  She sits in the car and waits!

Tom was done with his outdoor work and was resting on the couch while I was cleaning up the kitchen when he said, " Come in."

No one can sneak up on you at the cabin, you can hear gravel sounds of a truck or you hear a bark of our Granddog Ruby.

I told him," There is no one there!"  I looked out the window and the van was missing!

I ran to the door, and saw that the van was about ready to hit the satellite dish and it had already run over the humming bird feeder.  A few more yards and it would have plummeted into the lower forest.

I saw Hope in the driver seat.  I ran to the car door and it was locked.  She looked at me with her pink painted eyelids, stuck her tongue out and said, " Go Away!  I'm a good driver!"  She put it in reverse and backed up the hill with me hanging on!

I ran to  the house, found my keys, clicked open the door and there sat Hope with her seat belt on and a sweet teen look on her face repeating." I'm a good driver!"

This could have been bad.....very very bad!  I still relive it with different scenario's...Your imagination is as vivid as mind so I will just let you think about it!  I wonder if she learned how to start the car by watching youtube or just by watching me.  It still makes me shutter....to think....what if....

So many lessons and so many rules!

I know you can't wait to hear about the time I almost died in the woods!