The day I almost died by the cabin in the woods

I know you have been waiting for the post about the day I almost died by the cabin in the woods.

It was early spring and Tom rented a Bush hog to cut through the thicket of the woods. We are making this land a tree farm. And he figured that this would be a great way to clear the land. This bush hog was very heavy, very powerful and very noisy as it cut through small trees grinding and throwing the debry. He was very successful on the higher ground where it was nice and flat but the sound was deafening. I would listen for the sound from the cabin to make sure that he was o k.

The sound stopped. I looked out. I didn't see him. I scanned the horizon and saw him down in the forest where the bush hog was stuck.  It broke down at an angle on a cliff.

Ok....this is something we rented....we couldn't just leave it there like the neighbors leave their cars in the forest...we had to get it out.

Ok....again....I am not outdoorsy, I am not a workout queen, I am not a senior citizen who likes to get her hands dirty.  It was outdoors, it was muddy and I had on fashion tennis shoes!  AND....Hope was down there with us!

You know the story about the Little Engine that Could?
That was me. Instead of..."I think I can"...I said..."I can't do this. I can't do this."  I thought that I had died!  I am the person in the family who has a weekly appointment with a chiropractor for arm and hand pain.  I am the person who had carpal tunnel surgery.  I am the person who wears a splint on her wrist at night!! I knew that I was a goner....my life passed before my eyes! That bush hog slipped towards Tom and knocked him down.  Something happened and "wala" it was up on high ground!

We got it out of the woods without ONE cuss word. WE did it.

We weren't done. We still had to get it into the trailer. Tom laid his head on the handles and prayed! Hope stood there in awe.  I was huffing and puffing and didn't realize that we moved it off of the cliff.

In the end, we got it on the trailer. Once again, I had two jobs. (See the above descriptions)  We came to realize, that working in the woods is not an easy job for two seniors and a teen. We also realized that we need a back up plan for when we do have an emergency.

Here is what I have found out since this adventure.  Our area is covered by the 911 plan.  We actually have a address that can be found on gps and the $35 that I paid to the Volunteer Fire Department is my insurance that help could be on the way.  We also have located the nearest hospitals and exchanged phone numbers with our neighbors.

Remember when I told you about Hope driving the car....That could become a reality during one of these adventures!

On the day that I almost dies by the cabin in the woods, I found an arrow head.  It was laying right in front of me as I was huffing and puffing not realizing that we moved the bush hog.  I don't know if that is a "sign" or just good luck.  But finding an arrow head is pretty  darn cool. 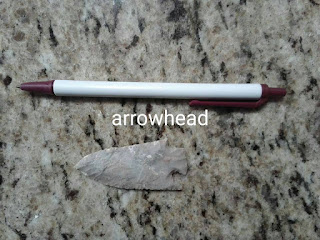